This is a set of plans for an inexpensive, high performance digital logic probe that you can build in a few hours. It is small enough to use a plastic ball-point pen as a chassis, giving it a personalized touch and added style. The main advantage of this design is that the LED will only light when the probe tip is touching a voltage source (not floating). This is a necessary feature when working with tri-state logic, and is overlooked by most logic probe plans found in textbooks. 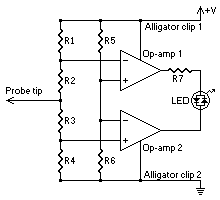 Prepare the pen by removing the ink cartridge and by cleaning out any ink residue. Solder the probe tip to R2 and R3 as shown in the schematic and epoxy this assembly into the bottom of the pen. While the epoxy dries, prepare the top half of the pen for the LED by drilling a mounting hole if necessary. Drill another smaller hole in the side of the pen for the power leads to enter. 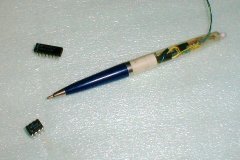 How to Use the Logic Probe

Your new logic probe is very easy to use. To test the voltage of a logic circuit at any given point, first connect the power (alligator) clips to the circuit's power supply. Next, touch the tip of the probe to the point you want to test. The LED will light green for a voltage less than 9/20 the power supply voltage and red for a voltage greater than 11/20 the power supply voltage. A high-frequency signal will cause the LED to oscillate between red and green, appearing orange.